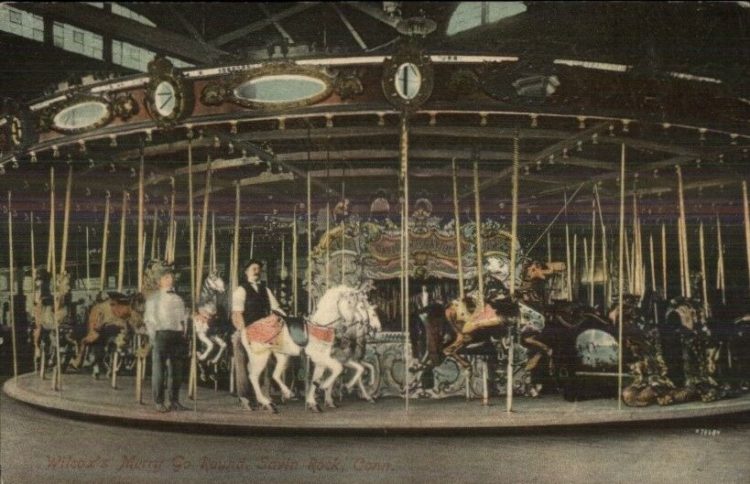 The Irish In New Haven : Leisure

One of the biggest attractions in the
area was Savin Rock Amusement Park in West Haven, CT.
Just a trolley ride away from the city, it was a place where people could unwind after a hard
week of work. Savin Rock also was a source of employment for many Irish Immigrants, my ancestors included.

In 1870, Civil War veteran, Middletown native and entrepreneur George Kelsey built a 1,500-foot pier off Beach Street and started ferry service to connect New Haven with its western shore. He also built the Seaview Hotel for up to 150 guests. The new beachside resort featured a bandstand, fountain, observatory, picnic grove, and a small, man-powered carousel. Eventually, a horse on a treadmill replaced the manpower. Kelsey convinced other businessmen to build other amusements. They added a zoo, museum and dance hall, and the area became popular for cock fights, horse races and prize fights.

The golden era of The Rock began with the opening of White City around the turn of the century, a decade after electricity was introduced to West Haven. It contained carnival rides, theaters, restaurants and hotels and ran along Rock, Campbell and Beach streets. Its entrance arch stood at Savin Avenue and Thomas Street.

Stanford Hotel[/caption]One of my ancestors, George Stanford, ran the “Stanford Hotel” at Savin Rock for many years. The Hotel was home to the “Stanford Orchestra” which had George’s nephew as Conductor. The “Stanford Hotel” on Beach St., (pictured left)had originally been an elaborate home owned by New Haven businessman and yachtsman by the name of Morgan. This area was the location of many beautiful summer homes. Later, the Savin Rock Skating Rink (Latta Arcade) was on the site of the Stanford Hotel. The Arcade was burned down in the 1960’s.

The “Park” was the area of Savin Rock which held the bandstand, the Fountain and the Seaview Hotel. The Bandstand was later moved to a site on Palace St. and later became “Chris'”, a refreshment stand. My father worked there when he was in High School.

Here is a link to a story about Savin Rock on ConnecticutHistory.org:Savin Rock Park: “Connecticut’s Coney Island”

Here are some scenes of this popular recreation site in the New Haven area.