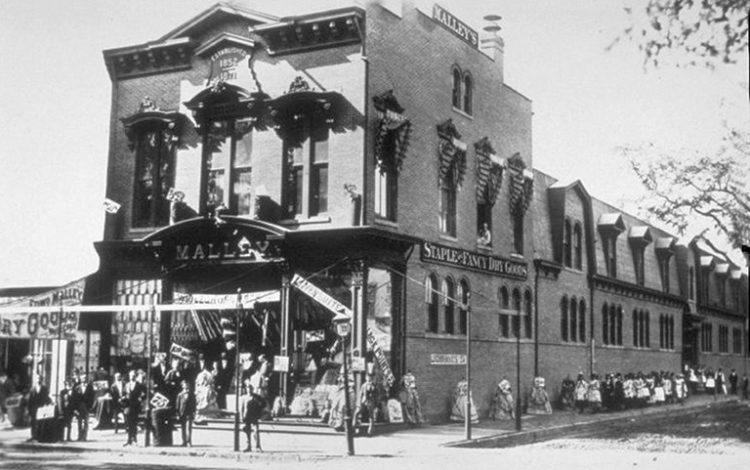 The State of Connecticut’s “Today in Connecticut History” Page posted a story about the fire at Edward Malley’s in New Haven in 1882.

“February 1882 was not a very good month for New Haven businessman Edward Malley (1827-1909). The ambitious son of Irish immigrants, Malley had worked his way up from

selling assorted dry goods to Elm City denizens out of his aunt’s front parlor to purchasing a modest storefront of his own on Chapel Street in 1852, from where he would make home deliveries on a mule-pulled cart. In just four years’ time, Malley’s dry goods shop had expanded to a three-story department store which employed 100 people. By the 1870s, the department store was hailed as “one of the largest in New England,” and the Malley family was one of the wealthiest in town.

On the morning of February 28, 1882, however, Malley awoke to the news that his extensive department store complex was completely engulfed in flames. A night watchman had first spotted flames coming from the rear of the main building at 4:00am and sounded the alarm, but the flames spread quickly and ended up destroying the entirety of Malley’s store. It was the second time Malley’s department store had caught fire in the past seven years. Newspapers across the country reported the event, and set the loss at $175,000 (several million dollars in today’s money).

The Edw. Malley Co. store, before being damaged by the first of two late 19th century fires, circa 1871. (New Haven Museum)
News of his store’s total destruction only compounded what was already a difficult month for the immigrant turned department store magnate. At the same time his business was burning, his son and nephew were sitting in jail, awaiting trial for the sensational murder of Jennie Cramer, a beautiful young New Haven girl. In its report on the fire, the New York Times noted that Edward Malley had paid “large sums already to aid the [accused] boys in their defense” — including hiring several private detectives — and speculated that the loss of his department store might hinder his efforts to clear their names. The sensational trial began in April and though the Malley boys were eventually found not guilty of murdering Jennie Cramer by arsenic poisoning, the Malley family would face accusations of bribery and witness tampering for years. Malley’s department store, however, fully recovered and went on to be an icon of shopping in New Haven through much of the twentieth century, despite a most difficult day for one of New Haven’s wealthiest and most famous families, today in Connecticut history.”~Source: < ahref="https://todayincthistory.com/2019/02/28/february-28-edward-malleys-department-store-disaster/" target="_blank">February 28: Edward Malley’s Department Store Disaster.

It’s interesting that in the article they mention the murder trial of Jennie Cramer. One of my relatives was called to testify in that trial. I previously posted about the trial and my relative’s testimony here: Murder by Gaslight : Murder Mystery in New Haven, Connecticut.