The Irish In New Haven: Religion

The church was always an important part of the Irish immigrant’s life. In New Haven, that church was St. Mary’s. The original catholic church was called “Christ Church” and was established as a community of the faithful in 1832. At that time, there were about two hundred Catholics in New Haven. It is the oldest Catholic parish in New Haven and the second oldest in Connecticut.source:About St. Mary’s 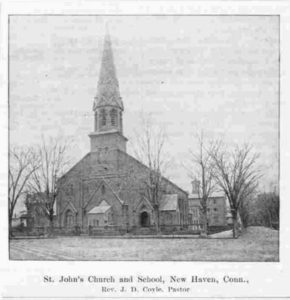 Land was purchased near the intersection of York Street and Milford Turnpike Road in New Haven. In 1834 a church was completed on this site and given the name “Christ’s Church.” It was so crowded at its dedication that the loft containing the organ fell, killing two persons. (source:A modern history of New Haven and eastern New Haven County, Volume 1 By Everett Gleason Hill)

Fr. McDermot was succeeded for a few months by Fr. William Wiley and then by Fr. James Smyth. In Father Smyth’s last year as pastor in 1848, the Church was destroyed by fire. Several months after the fire the property occupied by the Church Street Congregation Society on Church St was made available and was named “St. Mary’s”. On December 16, 1848, Fr. Philip O’Reilly, who succeeded Fr. Smyth as pastor, took title to the property and the Congregational Meeting House became the Catholic Church in New Haven. Bishop Tyler of Hartford dedicated the Church to St. Mary.

This property was the site of “St. Mary’s” for more than twenty years, while preparations were being made for an edifice which should befit the important center of Connecticut Catholicism which New Haven was destined to be. This was the new St. Mary’s Church on Hillhouse Avenue, sometimes incorrectly called “the cathedral.” which was completed in 1875 at a cost of $150,000.

As the number of Irish Catholic immigrants increased in New Haven, more Catholic churches were built. On the site where the first Christ Church had been burned was in 1858 erected a new St. John’s Church . Eight years before this, the older part of Grand Avenue had required its own church, and St. Patrick’s was built. In 1865 another congregation had acquired what was built as the South Congregational Church on Columbus Avenue, and had made it the Sacred Heart Church. (source:A modern history of New Haven and eastern New Haven County, Volume 1 By Everett Gleason Hill)

Later the Parish of St. Francis was established:

At a St. Francis Parish meeting in October, 1880, it was decided to build a parochial school to serve the predominatly Irish Catholic Fair Haven Community. This decision was reached only twelve years after the construction of St. Francis Church. Parishioners sought to assure that their children would receive a thorough education in their Catholic faith.

~from: History of St. Francis

The Knight’s of Columbus were originally organized in New Haven. 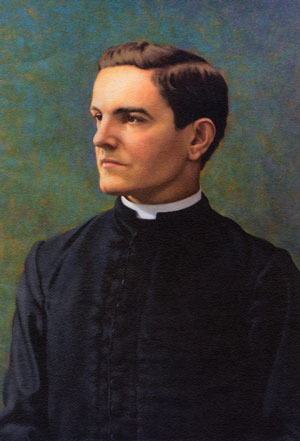 “In many ways, Father Michael J. McGivney was just one more of that band of hardworking Irish-American priests who spent themselves building up the Church in America in the latter years of the 19th century. But in one truly extraordinary respect, he was unique: Before he was 30, Michael McGivney had founded what was to become the largest Catholic men’s organization in the world: the Knights of Columbus.

That happened, largely unnoticed, in early February 1882 in New Haven, Conn., in the basement of St. Mary’s Church. The young curate had assembled 80 Catholic laymen — Irish-Americans like himself — who voted to launch the new group. No one, least of all Father McGivney, suspected that 132 years later the Knights of Columbus would grow to be an international body of 1.84 million Catholic men, with assets totaling more than $20 billion and an influence for good to match.” 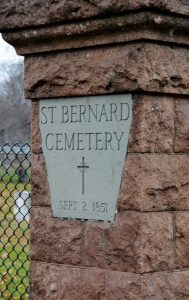 The Catholics in New Haven saw the need in the mid 1800’s to purchase land for a cemetery on the south side of Columbus Ave. near the West River. They named it “St. Bernard’s” and many of New Haven’s Irish immigrants are buried there.

Prior to the establishment of St. Bernards, the Catholic community in New Haven were buried in the Christ Church Cemetery. It was located near what is now St. John’s Catholic Church. In 2011 the cemetery was discovered while a construction crew was digging in the area. Here is an interesting story about what they found and how they tried to find out who the remains belonged to: Excavated skeletons yield clues about 19th-century immigrant life in New Haven

The Sisters of Mercy were responsible for establishing one of the first orphanages in New Haven. The Sisters, having arrived in New Haven the previous year, conducted a fair in 1853 for the benefit of the forty orphans sustained by the Catholic parish. Town records also note an appropriation in 1861 “of 150 dollars to the Orphan Asylum managed by the Sisters of Mercy.” The Catholic Orphan Asylum of St. Francis was chartered in 1865.